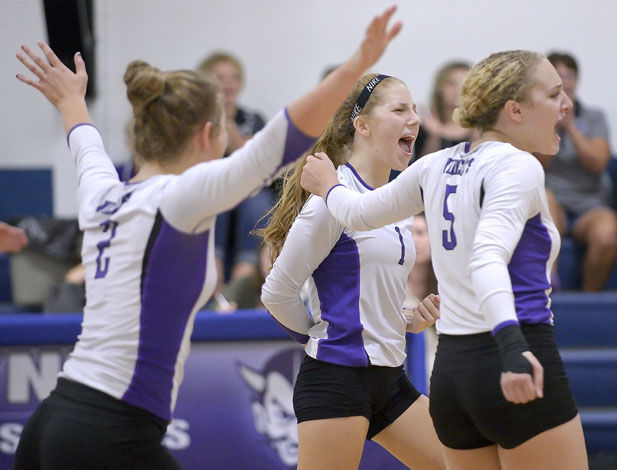 “It’s great to have the talent of our girls to get us through a challenge like this,” H-N coach Leigh Haselhorst said. “This is always a good rivalry and we won it tonight. We’ll use this to obviously make us better.”

The Blue Devils won the opening set and were poised at times to make the match a runaway, but the Wildcats weren’t having any of it.

“Give them credit,” Wynot coach Tammy Wieseler said. “We’re a little inexperienced, so a match like this really gets us going into the next match.”

“I tried to tell our girls to get after every point and keep the heat on them,” Haselhorst said. “This is a tough place to play and we all knew we had our work cut out for us.”

Work is exactly what carried the Wildcats.

After Hartington-Newcastle took the 2-1 lead into the fourth set, Wynot evened the match to force a fifth set.

“We’ll take some confidence from battling back in the fourth set,” Wieseler said.

Emersyn Sudbeck finished the fourth set for the Blue Devils with a back row kill off the Wildcat block.

In the decisive final set, it was even early on before H-N grabbed a 7-6 advantage on an ace serve from Autumn Lammers.

Abbe Morten pushed the lead to 8-6 with a block at the net.

“The entire match was kind of a roller coaster,” Wildcat junior. Belle Harms said. “We just kept after them and relied on each other to get it done.”

Wynot battled back to even the score 8-8 on a Katelyn Heine winner and a Hartington-Newcastle error, but a Rayne Allvin kill got the lead back for the Wildcats for good.

“We’re really developing some good team chemistry,” Haselhorst said. “On and off the court these girls get along — that’s very important.”

A Wynot service error after Haselhorst called timeout made it 12-9 before Morten hit back-to-back ace servesto make it 14-9.

A Harms block at the net closed out the match for the Wildcats.

“We’ll keep coaching to make our team better,” Wieseler said. “We’ll learn from this and move on.”